It's my friend Jan's birthday and she is coming round later with her family for a celebratory meal. We are having the fabulous Sweet Potato Crepes from Vegan with a Vengeance to start with. Jan is a big fan of rum so I have developed Pirate Bread! This is a banana loaf infused with rum soaked raisins which I have loosely based on the banana chocolate chip bread I've been making from Babycakes so it's gluten free too. 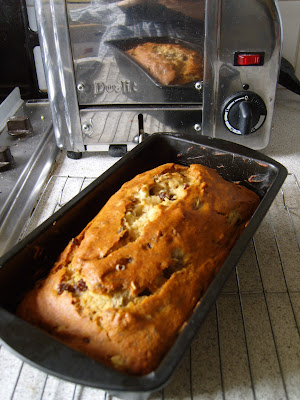 Pirate Bread
Ingredients
1 cup of Dove's Farm Gluten Free Flour
1 teaspoon of baking powder
1 teaspoon of bicarbonate of soda
1/2 teaspoon of xantham gum
1/2 teaspoon of salt
1/2 teaspoon of ground cinnamon
1/4 cup of sunflower oil
1/3 cup of agave nectar
1/3 cup vanilla soya milk (or if using plain also add a teaspoon of vanilla extract)
3/4 cup mashed bananas (approx 1 and a half bananas
1 cup of chopped raisins soaked in 2 tablespoons of dark rum (for a least 1/2 hour)
Preheat the oven to 325F/ 163C
Grease a 7x4x3 inch loaf tin
Sieve the flour, baking powder, bicarbonate of soda, xantham gum, salt and cinnamon and mix together. Add the oil, agave, soy milk and vanilla extract if using.
Stir until the batter is smooth. Mash the banana and gently fold into the batter along with the run and raisins.
Cook in the oven for 35 minutes until a toothpick comes out clean.
Let it stand for 20 minutes on a cooling rack before trying to remove from the tin.
Finished off with a drizzle of icing made from icing sugar and dark rum.