Delicious Art from the National Gallery

August 19, 2013
Last week I received an email asking if I'd like to review a tea blend inspired by a painting in the National Gallery. I jumped at the chance as tea and art galleries are two of my favourite things. The tea is part of a collaboration between the National Gallery and the East India Tea Company. What caught my attention was that it was more than the usual box of Earl Grey with an image from the collection on the packaging along with some matching shortbread biscuits. The company's tea master Lalith Lenadora has used what's going on in the images to inspire these new blends. As someone who used to work in an art gallery education department where we were always looking for new ways to interpret art this idea caught my imagination. There's 6 teas altogether as shown in this picture. 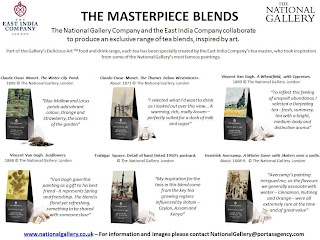 I got sent Blend No 129. This is a blend of fine black ceylon fbop tea flavoured with cinnamon, orange flowers, orange peel, black,white and red pepper, nutmeg pieces, vanilla essence, cloves and vanilla pieces. It's inspired by a lovely Dutch painting by Heindrick Avercamp called A Winter Scene With Skaters Near A Castle. The tasting notes say " Avercamp's painting, dating back to 1608, intruiged me, as the flavours we generally associate with winter - Cinnamon, Nutmeg and Orange - were all extremely rare at that time and of great value. The blend combines these favourites with spicy red, black and white peppers, tempered with soft vanilla for one of my favourite winter warmers". 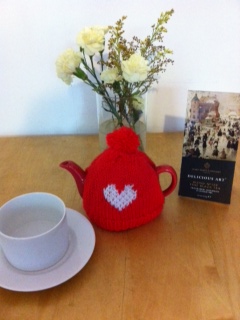 So what did I think of it? Well, when I first read the ingredients I wondered if it was going to be like chai which as regular readers will know I'm a big fan of. It's not though. The flavours are blended so that none of them stand out and dominate making it a rather more sophisticated brew. It also has to be said that this is one of the best smelling teas I've ever had a sniff off. I sat with my head in the box for 10 minutes after opening it! I found it refreshing and elegant and it's made me interested in trying some of the other blends. They are all black tea blends, either assam, ceylon or darjeeling with the exception of the tea inspired by Van Gogh's Sunflowers which is a blend of chamomile, rose buds and orange petals which sounds like an excellent evening drink. 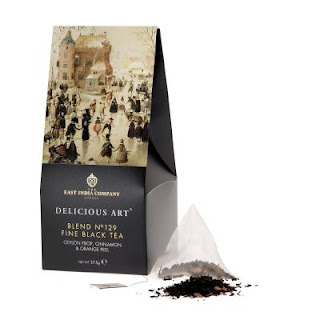 So where can you buy it? Well, it's for sale either through the National Gallery shop either in person or online or at the East India Company shop in London on Conduit Street. The East India Company also look like they do an amazing selection of preserves like plum, walnut, rum and raisin jam and tomato and thyme savoury marmalade to name but two! I'm surpised the gallery don't actually serve it in their tearooms. I'd definitely be interested in buying something like this as a visitor. At £7.50 for 15 teabags this tea doesn't come cheap, working out at 50p a cup and wouldn't be a replacement for an everyday brew. You are however paying for the champagne equivalent of the tea world. With tea of this quality if you make sure you brew it properly in a teapot you'll get three cups out of a bag, well I did anyway! For someone who's into unusual teas this would make a great gift. My family always ask me to do a birthday and Christmas presents list and fancy teas have been a permanent feature on it for the last few years. I'll be adding these to the list.