Sweet Treats - Purchased and home made

May 10, 2017
Here's a little round of some sweet treats, both purchased and home made that have been enjoyed recently. The other weekend I was in bed with a horrid chest infection binge watching the last season of project runway and Matt went out to do the weekly shop picking up a little extra treat in the form of blackcurrant cheesecake. This is from the new Tesco free from range and it was pretty good. A minor grumble would be that I like a biscuity base on a cheesecake and this one was sponge. It was gluten free though so thumbs up for producing a tasty treat suitable for glegans. 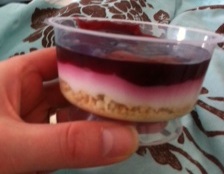 OkoBay produce a coconut based range of frozen products that are SFV. In the last couple of months we've had their coconut water ice pops and also this mango coconut milk dessert. Both were from Heron Foods and total bargains at 69p for 3 pops and 49p for the tub! 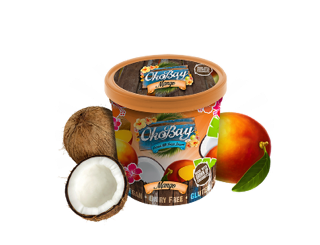 I braved the crowds at the Manchester Vegan fair last month going early and getting out just as it was getting busy. The crowds a few years ago put me off going to fairs for a long time as I just didn't feel safe when they were held at Sachas. The new venue at G Mex was a massive improvement and I was so impressed by the range and quality of stalls. I was sorry I only spotted Gorgosaurus just as I was leaving and almost spent up as their cupcakes looked excellent. I did have enough pennies though to purchase their version of a childhood treat. I used to feed iced gems to my toys at pretend birthday parties. I have fond memories of them but these Iced Jims were even better. The base was the most delicious tiny melt in the mouth shortbread heart topped with icing. I was so impressed with the detail in making these and it was hard to ration them out! 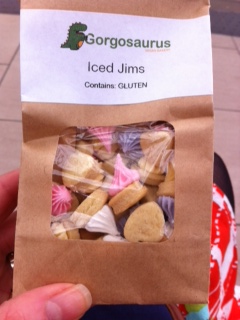 Also at the fair I picked up a walnut whip for Matt as I know they are a non vegan sweet he misses. Whilst I liked the chocolate on these I was a bit disappointed by the filling which I think might have been made with aquafaba. It was just a little bit airy and I would have liked something more fondant like. We ordered some amazing vegan creme eggs from Lakeside Ethical Treats at Easter and the filling from them would have been perfect. 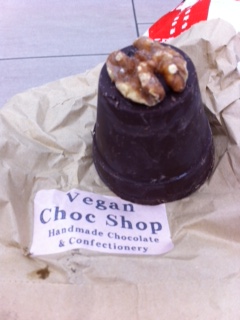 The Afternoon Tea Company launched at the fair and they sell afternoon tea in a bag for one. It's such a great idea and you even get a tea bag, wooden knife and napkin alongside your scone, jam and delicious cream. The company are based in Glossop and sometimes supply the Pie Parlour. They also will do events such as Crafternoon Teas suitable for birthdays or hen do's. 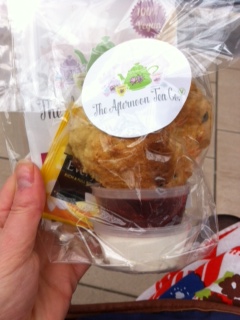 We went away to the Lakes for a few days after the fair and enjoyed these when we arrived at the B and B. 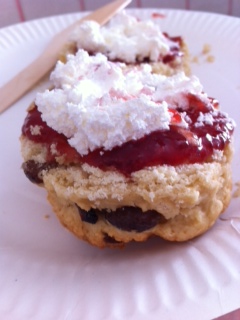 We have a community meal once a month in Glossop called The People's Kitchen. It's a low cost meal cooked by volunteers, always vegan with gf options and any profits go to charity. Matt volunteered to cook for the February one and produced a yummy tagine with rice, flat breads and salad. I made some rose and pistachio cupcakes and for the gluten free option these chocolate and sesame  Ghriba cookies using this recipe. I've tried to make flourless cookies like this before using nuts and they've been a total disaster but these were perfect and were like macaroons. As someone who has had zero success with aquafaba macaroons I'll be defintiely using this recipe again! 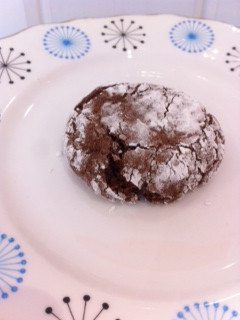 Finally, here's a cake I made to take to Matt's mum's at Easter and something I'd never tried before - Simnel Cake. I'd also never made my own marzipan from scratch but loved how it tasted. I used a recipe that I found online on the Indigo Herbs site and it came out really well. It's a citrusy fruit cake that also has a disc of marzipan baked through the middle. It was my first Simnel cake but I can see it becoming an Easter tradition. 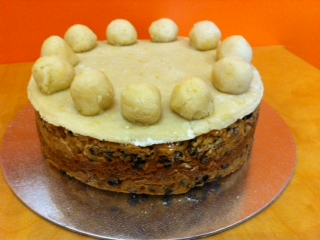