Bees in the Hive 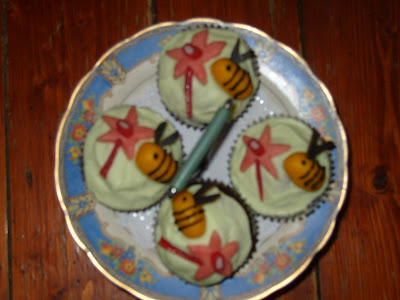 I've recently started a new job in a new organisation in a brand new office block which is called 'The Hive'. It's a very 'Eco-designed' building with special air conditioning, a boiling water tap to make instant brews and a green roof. As we are such a new organisation there are various team building things going on. Yesterday we had a 'Bring and Share' tea break. There was a really great response and there was all sorts of sweet and savoury treats, most of them home made. I'm the only vegan but my sister works there too so she made some vegan friendly biscuits.
I went with these bee themed cupcakes. I used the basic chocolate cupcake recipe from Vegan Cupcakes Take Over the World but baked them in muffin cases so they were nice and big. Then with various food colourings, gelatine free sweets and marzipan I made the frosting and decorations. They were one of the first things to go!