November 21, 2011
The medical world can be a tricky subject for vegetarians and vegans. Animal Aid are currently running a campaign to highlight which major medical research charities conduct and fund animal testing and there is a full list here showing health charities stance on this subject. I've found this info very informative and it has definitely made me think but at the same time I take a prescription drug which is definitely not vegan and which I have been told to take indefinitely. At this moment there is no vegan alternative available and I don't want to go back to how I was feeling a year ago before I started taking it. One thing I intend to try to do more of though is focus on those charities that don't fund testing and lend support to them instead. 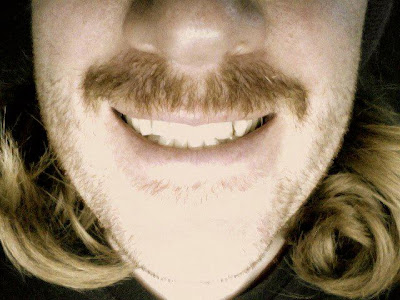 As I'm sure you're all aware November is Movember and is a month for raising awareness of and funds for prostate cancer charities. Above is the face of one of the Cake Liberation Front founder members, Steve Cunio. Steve decided to take part in Movember but when he looked further into the charities it donates to he found them all to support animal testing. He has been in touch with the official Movember people and has suggested them offering alternative charities for future years. Hopefully, if enough people do this it might happen! In the meantime he has decided to continue growing his facial hair and is donating all sponsorship to Dr Hadwen Trust who fund and promote the development of techniques and procedures to replace the use of animals in biomedical research and testing. Indeed he is one of two guys listed on their supporters page doing this. He has set up an easy way to donate from as little as £1, go here to find out more. Thank you!