Showing posts from March, 2012
Show All

More of the Midlands! 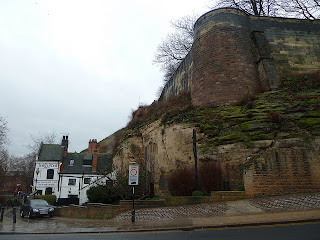 I was back in the Midlands again this weekend, this time in Nottingham. I got to sample locally brewed beers in the oldest pub in England! Ye Olde Trip to Jerusalem is an amazing warren of rooms built into caves in the side of Nottingham Castle! It's reportedly haunted . In addition above one of the bars is a cobweb encrusted galleon in a case. Apparently, the last three people to attempt to clean it have died in unexpected and mysterious circumstances within 12 months of doing so! Last weekend I had the vegan breakfast at Odder in Manchester which recently won a spot on the Top 10 vegan breakfasts list. In Nottingham I was able to check out another from the list with a visit to Alley Cafe . It was excellent and was the best scrambled tofu I've had outside of my own kitchen. I often find cafe versions quite bland but this had onions in it and a slightly smokey flavour. So, wonder which one on the List I'll get to next! It would be great to get to t
4 comments
Read more

Guess which city I went on a day trip to this weekend. Here's a clue! The streets are indeed paved with gold. Well, the public artwork is at least! This new building still under construction is the new library. I love the lace like exterior. We went to see a major craft exhibition Made in the Middle at Mac. It's great, if you're interested in craft and can get there, go. I was with 2 friends from Manchester Psychogeography group - The Loiterers Resistance Movement so we had to check out the Hamish Fulton exhibition at Ikon Gallery too. We also loved the exhibition on there by Irish artist Sarah Browne . Check out these traditional Icelandic sweaters with hidden words which were a response to what people said were the best and worst things about living there. Lunch was at the fab Warehouse Cafe which caters really well for vegans. After much deliberation we all went for the BBQ burger with wedges. Great service and lovely food which w
Post a Comment
Read more 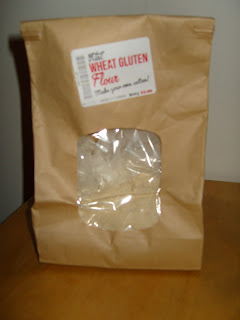 Hurrah, I have a bag of Vital Wheat Gluten Flour from the fabulous VX . But what to make with it? Last time I went to New York I brought back a small box of it and used it all up making the same thing which was the excellent Chickpea Cutlets from Veganomicon . I am determined to branch out and try something else but maybe not just a block of seitan. Does anyone have any other suggestions? I'm sure I've seen it in sausage recipes and things?
5 comments
Read more
More posts