Showing posts from February, 2013
Show All

I had heard the news that Waitrose had started selling Speculoos spread. Sadly we do not have a Waitrose in Manchester. Well, we do but it is Little Waitrose and therefore never has any of the elusive accidentally vegan things that I want to get such as Dorset Cereals gingerbread porridge ! However, we do have plenty of the fantastic chain of discount stores known as B and M Bargains . B and M's regularly come up with the vegan goods and along with my other favourite Quality Save/ Home Bargains they are great for picking up goodies for the UK Vegan Food Swap . Well, it looks like B and M's get Waitrose's overstocks as the gingerbread porridge turned up a few months ago and this weekend in the Ashton Store I spotted the Speculoos spread in both the sweet and crunchy versions. Result!
7 comments
Read more

Cheers to the Vegan Food Swap! 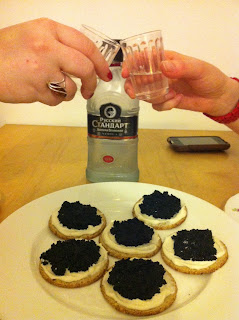 My UK Vegan Food Swap parcel arrived last Friday just in time for the weekend. As is customary, I will do a full post about it at the end of the month but here's a taster. This month I was sent goodies by Mitsu, who is one of the organisers from To Happy Vegans. It was the first time I received a parcel where I had not tried a single product in it before! I've not been to Ikea for years so I had no idea that you could buy vegan caviar . Amazing, it's acutally made from seaweed! We had it on oatcakes with a fake sour cream topping then the caviar on top of that. I used this recipe and fully intended to make the blinis too but the shop had run out of buckwheat flour! There must have been a rush on with pancake day. For mains I tried recipes I'd not cooked before from Appetite For Reduction . This is the Broiled, Blackened Tofu which you actually grill to cook, a new tofu technique to me. It was quick to do and tasted great. Served alongside it is steamed kale
1 comment
Read more 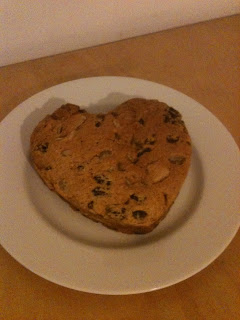 It's 3 years today that I started writing this blog! I'd just had a particularly miserable Valentine's Day, a long term relationship had just broken up and I wanted to do something for a distraction. Wow, such a lot has happened since then. I've changed jobs, gained a beautiful nephew and niece and am a year into a new relationship with someone who makes me wonderfully happy. There have been some low times too but the good outweighs the bad and makes me reflect on the importance of keeping positive and keeping going during the tough times and also being kind to yourself.  So, be kind to yourself this Valentines Day whether you are single or with someone. In the many years that I've spent it single I always treated myself to something nice. Cake of course is always good. Pictured above is my veganised version of Nigella's Marzipan Fruit Cake with whisky subbed for rum. Mmmm, so good.
4 comments
Read more 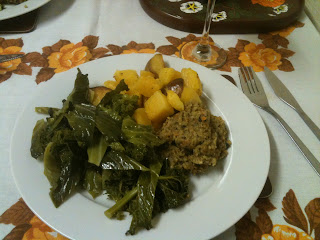 So, I've not blogged in a while. There's been a lot going on and it's not been a top priority, though I have been keeping up with reading other people's blogs during my lunch hours. January has not been the best of months. My mum had a stroke and has been in hospital, we didn't get our vegan foodie trip to London and our heating systems at work have failed miserably and I've been working in scarf, coat and fingerless gloves most days! The good news is that my mum is out of hospital and doing well so let's hope the rest of the year is on an up. I've not always been eating the greatest or most exciting of foods but there have been some highlights. Matt honoured my Scottish heritage by cooking us a Burn's Night supper. It consisted of vegan haggis , steamed kale + cabbage and tatties and neeps. The later were from a BBC website recipe and consisted of roasting the veg rather than the usual mashing and whilst it's not traditional I think I
2 comments
Read more
More posts