August 06, 2012
It's been a weekend of good food! Last week I cleared a cupboard out and found my long lost spiraliser so Friday's lunch was courgetti and pesto. 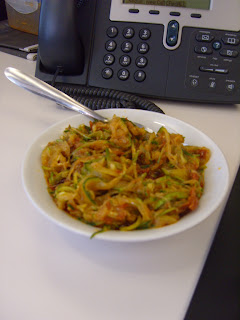 I caught the train over to Glossop after work to spend the weekend in Derbyshire. Matt made this lovely tea which consisted of brown rice, a Spanish chickpea and butternut squash stew with a Redwoods Schnitzel on the side for good measure. 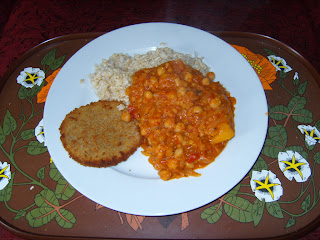 Sometimes you really need a dessert, especially on a Friday after a long hard week. This impromptu concoction was yummy - there was a base of crushed hobnobs topped with Alpro caramel dessert, Sojasun lemon yoghurt, grated chocolate and a cherry. 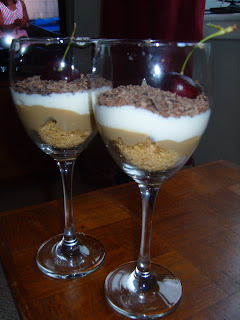 In that annoying way of the world we woke up at 6.30am on Saturday and couldn't get back to sleep. So we got up and caught a bus part of the way up a very big hill and went on a five mile hike. To set us up for it was a cooked breakfast with a baked,marinated portobello mushroom, chopped up Fry's braai country herb sausage and a couple of rounds of brown bread toast. Matt picked up this gluten free bread to try as it was reduced in the Coop to 70p and we are both trying to eat less wheat. It's made by Robert's Bakery and is the nicest gluten free bread I've ever tasted. It's called Yes, You Can! 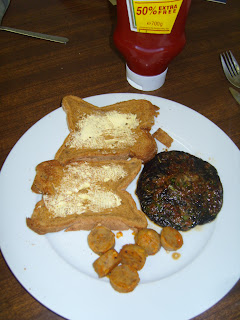 We stopped for a cup of tea by the remains of this plane crash from 1944. The good news is that I Googled it and the two man crew escaped with just cuts and bruises. 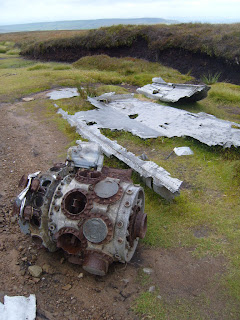 We were back home for lunch which was the Lentil and Eggplant Chilli Mole from Appetite for Reduction served with a couple of corn tortillas. We made this a few weeks ago and it froze well and tasted great. So great I forgot to take a picture until I'd eaten most of it! 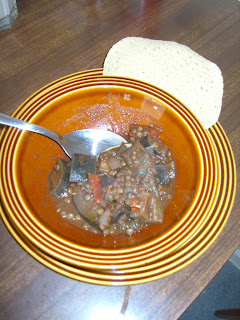 Saturday we went to visit friends for the opposite of a house warming do, whatever you would call that! No pictures but we had a lovely veggie buffet including delicious ratatouille and couscous. I was the only vegan but the hosts made all savoury food vegan which was so nice and they got me some of these Hale and Hearty Chocolate and Date flapjacks for dessert. Now they might sound a bit worthy, but they tasted anything but. I would definitely recommend them and they are gluten free too. We returned the favour by doing a Sunday buffet tea. Matt has really embraced sushi making after learning how to do it last weekend and after watching the Post Punk Kitchen video has even mastered the inside out roll! 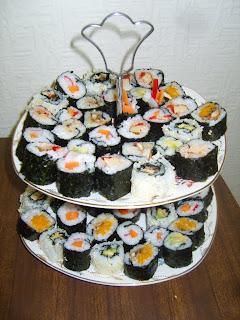 Here's shot of the whole table. We also had vol au vents, salads, home made humous and pate. 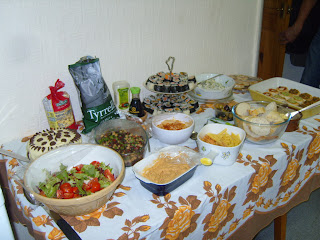 And for dessert the Raspberry and Almond Cake from Vegan Diner which is fast becoming one of my favourite cakes. 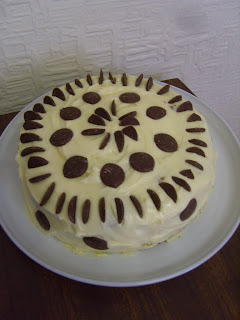