September 06, 2012
Whenever I'm in an unknown big city I'm always grateful for Wagamama, that there is one chain where I can get some good vegan food. Happily, I've just discovered another. I've been aware of the Las Iguanas chain for a few years but had never ventured inside one or looked on their website until this week. My friend Jan suggested going out for some after work Happy Hour cocktails and that's where we decided to try. 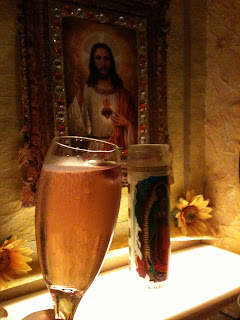 We had delicious Cana Royales made from cachaca, raspberry liqueur, elderflower and topped with cava. I am a bit of a cocktail snob but I was impressed with these. And the other good news is that they have some vegan friendly food choices too. Jan went for the Mexican Popadoms with guacamole and I had the Veggie Moqueta. This was a creamy coconut curry of sweet potato, palm hearts, sugar snap peas, peppers, garlic and tomatoes. It was accompanied by rice, plantain, salsa and toasted coconut. It was exactly the sort of curry I love, rich and flavourful and not too spicy. 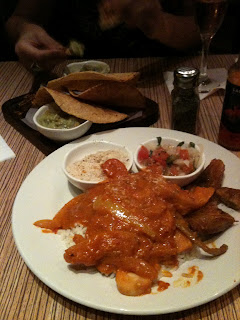 At the opposite end of the scale it's great to support independent businesses, especially vegan ones. V Revolution opened in Manchester earlier this year and I'm lucky that it's round the corner from where I work. They are a record shop but also stock vegan food, drink and snacks. Plans are to also have a cafe space soon specialising in sandwiches that offer more range than just the staple of humus and roast veg. I popped in after work tonight to stock up as they had just had a Vegusto delivery. We were off to a gig so it was a quick but delicious sandwich tea of crusty bread with Vegusto picante, pear + ginger chutney, tomato and rocket, Marks and Spencers crisps and Matt's homemade potato salad that consists of new potatoes, Plamil garlic mayo and the secret ingredient of chopped capers. Yum. 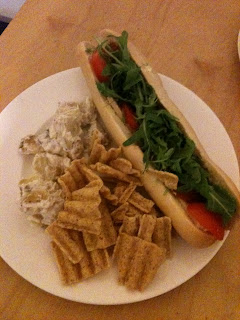