February 03, 2016
Inspired by my friend over at the My Cat Loves Daiya blog I've been using my local library for recipe inspiration. The weather has been awful this week, so wet and windy, and I was drawn to this little book of recipes for Hot Toddies. 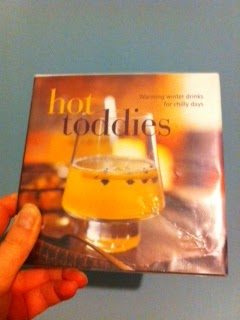 The book has large section of alcoholic hot beverages with things such as mulled wine and cider, glogg, hot buttered rum and of course hot toddy. Towards the back is a non-alcoholic section and I was attracted to the recipe for Moroccan Spiced Coffee first. 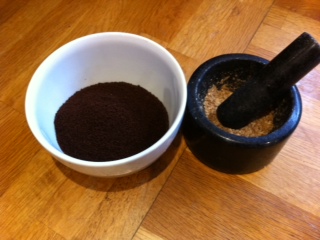 I used decaff coffee for this as it is what Matt drinks at home. I usually drink one cup of caffeinated coffee a day and then switch to decaff if I want anymore. I also don't like caffeinated first thing in the morning so this was a good breakfast blend for me. To two ounces of coffee you add a spice blend made from a cinnamon stick, two teaspoons of toasted sesame seeds, a quarter of a teaspoon of fennel seeds and the seeds from three cardamon pods. We tried this as both black unsweetened coffee and also with milk and a teaspoon of Sweet Freedom and enjoyed it both ways. A packet of this would make a nice quick and easy gift for a coffee lover too! 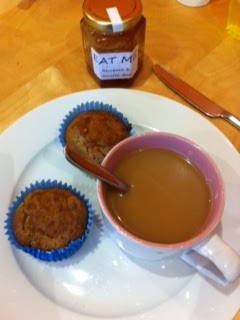 We are still working our way through Mad Men and are on series 6 at the moment. If you've seen the show you'll know how much alcohol and cocktails feature so sometimes we like to join the cast in a drink whilst we're watching. This spiced hot chocolate came from the Nogs and Creamy Drinks section of the book. 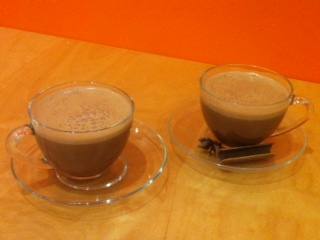 I altered it slightly to make it vegan and less alcoholic than the recipe suggested and it was a wonderful treat on a wet Wednesday afternoon huddled in front of the fire with a box set. In a saucepan you warm two cups of almond milk with two ounces of dark chocolate, the zest of half an orange, a tablespoon of your desired honey substitute (I used Sweet Freedom) and two whole star anise. After it was heated through and the chocolate melted I removed the star anise and frothed the mixture in the blender along with two dessert spoons of rum and two of orange liqueur. It tasted amazing and we'll definitely be making it again. 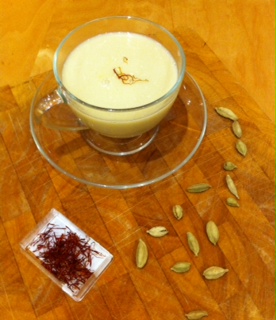 The final drink of this post comes from the Non-Alcoholic Warmers section of the book and is Saffron Milk. This recipe uses dairy milk and also condensed milk but it was easy to make with vegan substitutes. I warmed a cup of almond milk with a good pinch of saffron, two crushed cardomon pods and a tablespoon of maple syrup. After bringing to the boil I switched off the heat and let it sit for five minutes then gave it a quick rewarm before straining into a cup. Oh wow, this is such an amazing sweet and comforting drink. I often avoid hot chocolate at bedtime as I find the caffeine in the chocolate keeps me awake but I can see lots of cups of this in the future! It's also a great way to use up saffron. I don't know about anyone else but I rarely use saffron, maybe for a paella once a year and it ends up languishing in a drawer. This box is nearing it's best by date so I'm pleased to have found a new use for it.
vegan Hot Toddies vegan Moroccan spiced coffee Vegan spiced hot chocolate