July 31, 2018
I'm going to start this week with a couple of bargain hauls. Our Co-Op supermarket is closing down and the premises will become a B and M Bargains. It's sad because it's in a great location right next to the train station and it could have been a fantastic store but unfortunately it's been left to get more and more run down over the years and no money has been invested in it. It's frustrating when we go to other places and see the new style Co-Ops and see what it could have been like. I feel so sorry for the staff and also the post office who share the building is now under threat and have a year to find a new location. As a result of them closing a lot of the stock has been sold off at clearance prices. I picked up coconut sugar, cacao powder, maca and goji berries that were around £1.50 each. These will be very welcome in our breakfasts over the next few months. 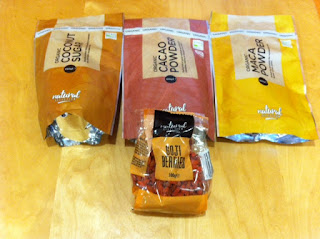 My second haul was a online order from Raw Living. Raw Living is Kate Magic's online raw food business and because I did a course with Kate last year and have also booked on one for October I'd built up quite a lot of loyalty points so that meant I got this order for half price! 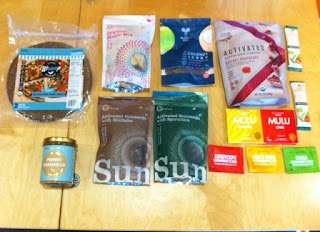 Here's a couple of close ups of things from the order. I'm looking forward to trying these raw pizza bases and still trying to decide what to top them with. They are made by a company called Wrawp who make a really interesting range of raw vegan and gf products with lots of different flavour pizza bases and wraps. 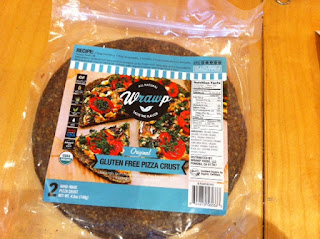 Whenever I order from Raw Living I always have to include a packet of organic magic mix. This is the best trail mix ever and I love it because it is packed with dried yacon root and big raw chocolate buttons. It's a favourite of ours to top breakfasts like chia pudding or the goji, avocado pudding that I learned to make on the course. 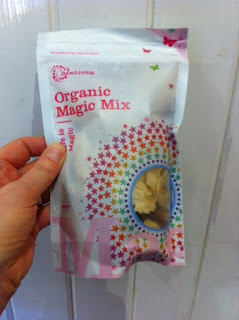 I have had this coconut jerky once before a few years ago but have never seen it since so I was pleased to spot it on the Raw Living site. I think this will be used for a pizza topping or maybe in an avocado salad. 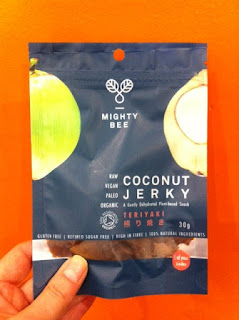 This week's top bargain was finding these Linda McCartney Scampi Bites in Heron Foods for £1. I'd only come across the frozen ones before. I really like these and you can get two portions out of a box. 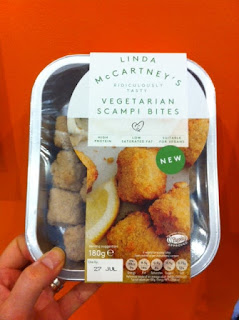 We picked up this mayo by Rubies in the Rubble at a farm shop a few weeks ago. It was a bit of a splurge item at over £4 but we were intrigued by it being marketed as Aquafaba Mayo. They are also a pretty cool company who make their condiments from ingredients that would otherwise go to waste for being the wrong size, shape or colour. It's pretty different to other vegan mayos we have tried and has a thick, creamy Hellman's like texture. We loved it and it was perfect for dipping the scampi bites into. 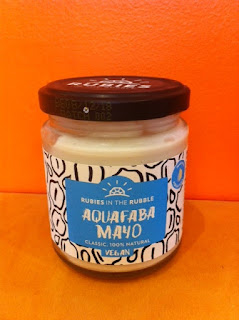 I've been making more things from Power Plates and this Korean Tempeh bowl was another winner and will definitely be made again. It made for a great Friday night 'fakeaway'. 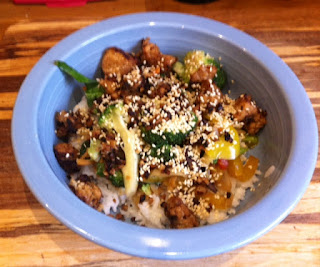 Another treat from the Raw Living haul was this Peanut Caramello from Almighty Foods which is basically peanuts with coconut nectar and a pinch of sea salt. It's more runny than a standard peanut butter so it is great for drizzling and I'm looking forward to adding it to smoothies. 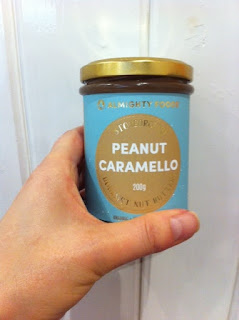 First off though I used it to make some ice cream! Typically me making ice cream seemed to co-incide with the end of the heatwave we've been experiencing but I'm not a massive fan of hot weather so I don't mind too much. 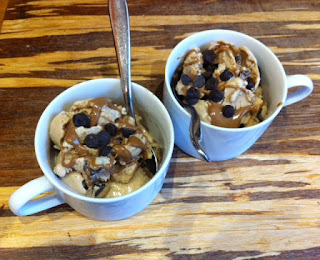 I also finally put my iphone 4 to rest this week and have got a new phone so hopefully you'll be seeing some better quality picture in future posts!