August 07, 2018
I've started sprouting again! In my old flat I used to do sprouting all the time. The flat was in an old 1930's building and had radiators run from a central boiler room and it was always nice and warm. The constant warm temp made sprouting pretty fail safe. Now I'm in a Derbyshire stone house where it's not as warm the results haven't been as great and I gave up trying  but with this very hot summer we are having I thought I would give it another go and I'm glad I have done. As I already have the seeds it kind of feels like free food too! I'm using these sprouts from A Vogel. 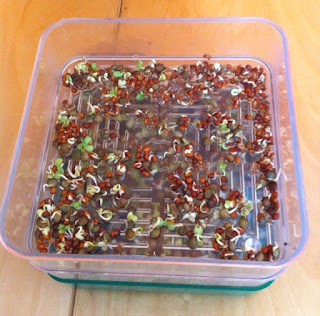 This week I've grown alfalfa but pictured is my first attempt from the week before which was a mix of radish, lentil and rocket which grew into lovely peppery tasting sprouts that we used to garnish our bowl meals for the week. These took 4 days to grow and I nearly gave up on day 2 because I could see mold. Luckily I googled and found out that it wasn't mold at all but root hairs on the radish sprouts which disappeared a few days later. Next up I'm trying red clover. I'm not a gardener and not good with house plants so I'm chuffed that I've found something that I've had success in growing and that is edible too. 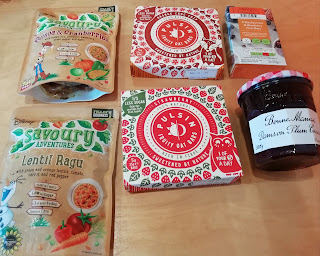 As I mentioned in my last post our Co-Op supermarket is closing down. It's the last few days of the clearance sale and I picked up a few more things. The pouches of ready cooked lentil ragu and quinoa, cranberry and butternut squash were 50p each, the Pulsin bars were reduced to £1.19 for a box of 5. There's two flavours which are strawberry and orange, choc chip. The little box at the back is some blackcurrant and apple bars which were 25p and the Bonne Mammon damson jam was 67p. I love Bonne Mammon conserves but hardly ever buy them as they are the most expensive. I also picked up a jar of their marmalade for £1. The jars with their gingham lids are pretty and I reuse old ones for breakfast jars. 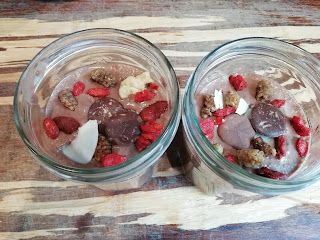 Talking of which her are some breakfasts from last week. Pictured here is raw chocolate and mango chia pudding using Urban Fruit dried mango. I have just joined Instagram at long last and have been posting them on there. I've stuck to breakfasts as Matt has long had an account for other meal creations.  I figured I should learn how to use it in case we decide to have one for the bookshop. My name is @teaandsympatico. If you're on it please let me know your name in the comments so I can follow you if I haven't already. 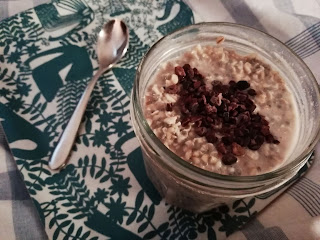 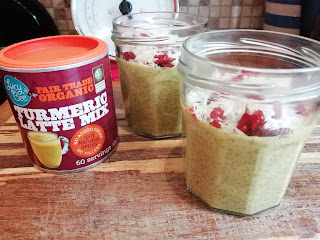 Finally here is a turmeric chia pudding that we have at least once a week. I've tweeked the recipe and finally found a version that I love so here you go if anyone fancies trying it.

Mix the chia, turmeric and cinnamon together in a bowl. Add the milk and stir well. Stir in the yoghurt and sweetener. Keep stirring occasionally for about 10 minutes to make sure the chia seeds don't clump up. Decant into 2 jars and pop in the fridge overnight. I like to top this with goji berries and coconut.
A Vogel sprouts chocolate cherry chia pudding penaut butter and jelly overnight oats pulsin bars sprouting sprouting from seed turmeric chia pudding Urban Fruit vegan snack bars