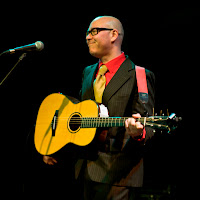 The Northern Quarter (theme of my blog for this year's Mofo) is home to some of Manchester's best live music venues such as Band on the Wall, Night and Day, The Castle, The Roadhouse, Matt and Phreds and 2022NQ.
Someone who has played at all of the above venues is Quiet Loner aka singer songwriter Matt Hill.  Regular readers of the blog will know Matt is also my partner and a few of my blogs this year have featured some of the festivals and gigs Matt has played at. This summer we had an amazing experience when he was invited by Billy Bragg to perform on the Leftfield stage at Glastonbury Festival where he appeared in a songwriters circle alongside Billy,  Amanda Palmer and Sean MacGowan.

So you're a vegan?

I've been a veggie for almost 25 years, but I'm only recently back in the fold as an 'outed' vegan. Although it'd been a long time since I ate dairy, I didn't really want to tell anyone I was a vegan. I still feel a bit like it's no one else's business what I eat. When I was younger I was quite interested in the politics of animal rights, and that led to me becoming a vegan. But I really disliked some elements of veganism. I hate people berating meat-eaters and I don't like people with a misguided sense of moral superiority. I'm glad to say vegansim today is so much more positive and life affirming than it was back then. It's as much about health and planet as it is about animals.

You're a musician. How do you stay vegan when you're touring?

I cope just fine. I only really tour in the UK and it's such a vegan friendly place. Being a vegan today is great, especially compared to the early 1990s. You can even get Marks and Spencers salads at service stations. After gigs can be hard but you can usually find an Indian, a chippy or a kebab shop that does falafel. It's no substitute for home cooking but it gets you by. Last week I had a Manchester show in the Northern Quarter so I was spoilt for choice. I do think Manchester is the vegan capital of Britain!

What three vegan food items would you hate to live without?

Potatoes. Mashed, roast, fried, chipped, I couldn't live without potatoes. Baked beans are my second choice, so good with anything. And fake meat for my third. None of these are particualrly healthy but I couldn't get by without sausage, mash and beans. Although I would need HP sauce to make that meal complete. Can I have that as my fourth?

You've worked and played in Manchester's Northern Quarter. Which shops or eateries do you recommend?

V revolution is top of my list. Not only is it a vegan shop and awesome cafe they also support the DIY music scene, selling vinyl and tapes. But it's the food I go for. I love their attitude, it's all about the ridiculous pleasure and comfort of food. Their burgers are a joy, thick tasty slabs of fake meat with fake cheese and fake mayo. I love it. But there are loads of other places too - This n That Cafe, Earth, the Arndale Market, the Craft Centre - I'm a regular at them all. I try and support as many vegan friendly businesses as my budget allows.

Even though he's not currently in the Northern Quarter I must also mention Martin the Mod and his veggie/vegan cafe. He did start in the Northern Quarter, when he was chef at Cafe Pop. His vegan breakfasts are legendary. I love what he's doing at Meat Free Monday too, taking the "rice n three" approach but bringing in all kinds of flavours and textures.

Tell us your future music plans?

I'm doing a few dates in September and October around Manchester and London. I'm playing a fundraiser in Barnsley for the Orgreave Truth and Justice campaign, which I'm really excited to be part of. The truth about Hillsborough has finally come out, but that was part of a pattern of Police cover-ups and State sanctioned criminality. Hopefully we can win justice for the Miner's who were at Orgreave. 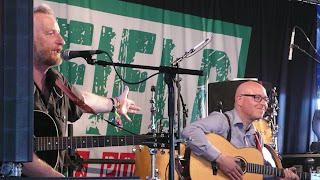