April 18, 2014
Last night I attended my first ever Pudding Club event. It was organised by Manchester LGBT Centre and held in their Sidney Street Cafe. If you're not aware of Sidney Street, the cafe is just behind The Eighth Day. It's a great space and manages to combine really reasonable prices with high quality ingredients in the food that they sell. This was their second pudding club event and the puddings on offer were exclusively vegan. 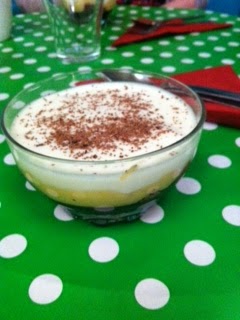 We started off the evening with a bowl of Manchester Trifle. What made this a Manchester Trifle was that the jelly in it was made up with Vimto! If you're not familiar with Vimto, it's a fruity cordial that originates from Manchester and is especially good served as a hot drink! 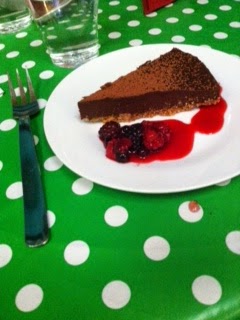 I had arrived with a tupperware in my bag and a promise to Matt that I would bring him some samples back to try. I didn't think the trifle would survive the train journey so I ate all of that but he fared better with some chocolate torte. This was excellent with a crunchy base, and a rich dark chocolate filling set off with a garnish of mixed berries and raspberry coulis. A classic textbook vegan chocolate torte. 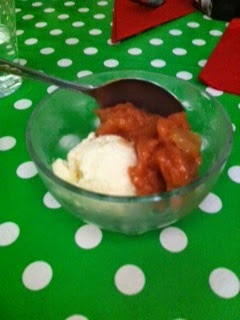 The next course was one of the surprises of the evening for me as I'm not a big ice cream person. The centre has an allotment and the sorbet was made with home grown rhubarb accompanied by custard ice cream. This was truly a perfect match, I would love an unlimited access to this pudding! My photo of the final pudding of the night turned out too dark to print and do it justice but it was probably the best Sticky Toffee Pudding I've ever tasted. The sponge was delightfully light with lashings of rich, sweet, creamy caramelly sauce. We were all sent home with copies of the recipes so I hope to be able to make some of them again. All in all it was a lovely evening and I really hope they hold another vegan version of the Pudding Club in the future.
Pudding club Sydney Street Cafe vegan cake