April 24, 2014
A few weeks ago we went to a birthday party in Harrow. This meant that we were passing back through Euston to get our train back to Manchester. We had a little bit of time to spare so we popped across to VX to pick up some treats. I was after some Field Roast sausages to try but sadly they had none in stock. What they did have were some cream cakes. 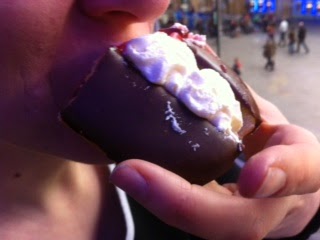 I'd seen pictures of this vegan patisserie from JP Turner Foods on several blogs following their appearances at Vegan Fairs so was delighted to get my hands on some. I have to admit I've never missed cream since becoming a vegan. If I had to choose something from a cake shop in the past I'd always go with an egg custard or vanilla slice rather than an eclair or cream bun. I really enjoyed my half of this massive eclair though and will definitely be hoping they've got them in stock on my next visit to London.