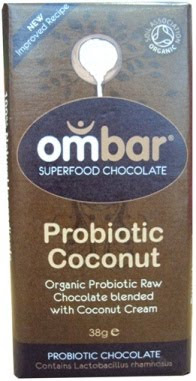 Raw chocolate is expensive compared to non raw chocolate although you tend not to eat as much of it in one go. Om Bars have been around for a while and tend to be the best value raw chocolate bars I've found retailing at around £1.99, they come in various flavours and very nice they are too.
They've just bought out several more flavours which are enhanced by probiotics. I do like a probiotic. I am addicted to Prime Directive which I have every morning in my breakfast smoothie. I tried the new probiotic coconut flavour earlier. I tend to prefer coconut in savoury things like curries rather than with chocolate but this was good. They've also stopped using agave for coconut sugar which apparently has an even lower GI. Read more here.